A quarter to seven in the morning and the sun is ascending behind the Martini Tower. The blue and orange of the Dutch sky. Muse of countless painters.

‘It won’t be tomorrow before we have slept’, my friend says.
We sit at the deserted La Place terrace atop the closed V&D. We got to the roof through the fire escape and climbed the scaffolds wrapped around the building.
‘But it is Friday… We can’t deny that’, I respond.
‘That’s true, but we are now in a sleepless limbo, where problems do not exist and our only concern is beer.’

At one point I even had pyjamas in the same colour as the couch, so my parents wouldn’t notice me

With a self-satisfied smirk he opens a new can for the two of us. He can still smile about his fate. The closing deadlines, the exams, searching for a summer job. We felt trapped and decided to escape. We will probably regret this all-nighter for the rest of the weekend, but right now we indulge in freedom. Maintain the delicate balance: being drunk enough to stop worrying and sober enough to keep functioning. The passing of time becomes vague as your mind loses coherence.
We all do this. The remnants of staying up too late as a child. Being brave and trying to watch the late movie like the adults do. Always trying to stretch bedtime, just a little longer. At one point I even had pyjamas in the same colour as the couch, so my parents wouldn’t notice me. Now, there’s no grown-ups anymore but us. No one to keep an eye on the clock and decide it’s been enough. Because, of course, dad and mom never forgot you were still on the couch, they lovingly pretended.

Shocked out of my daydream by a sound. A hatch opens and two police officers emerge from the hole. They say something in Dutch and we make clear we don’t understand.
‘You are not allowed to be here’, one of them says.
‘But please’, my friend replies, ‘we only want to see the sun come up behind the Martini Tower.’
The police officers look at our beer cans.
‘I think you guys stayed up long enough’, one of them replies, ‘you know we should give you a ticket?’
We smile sheepishly.
‘But sir, please, let us stay until the small arrow is on the seven’, I say, ‘because the best part is coming now.’
I point at the clock of the Martini Tower and then at the sky.
‘No, I’m sorry’, the officer says, ‘you seem like you’ve had a long night, you had your beers, it’s time to go to bed.’
‘Aw man!’, my friend replies while acting all disappointed. ‘Just look at the magic!’ 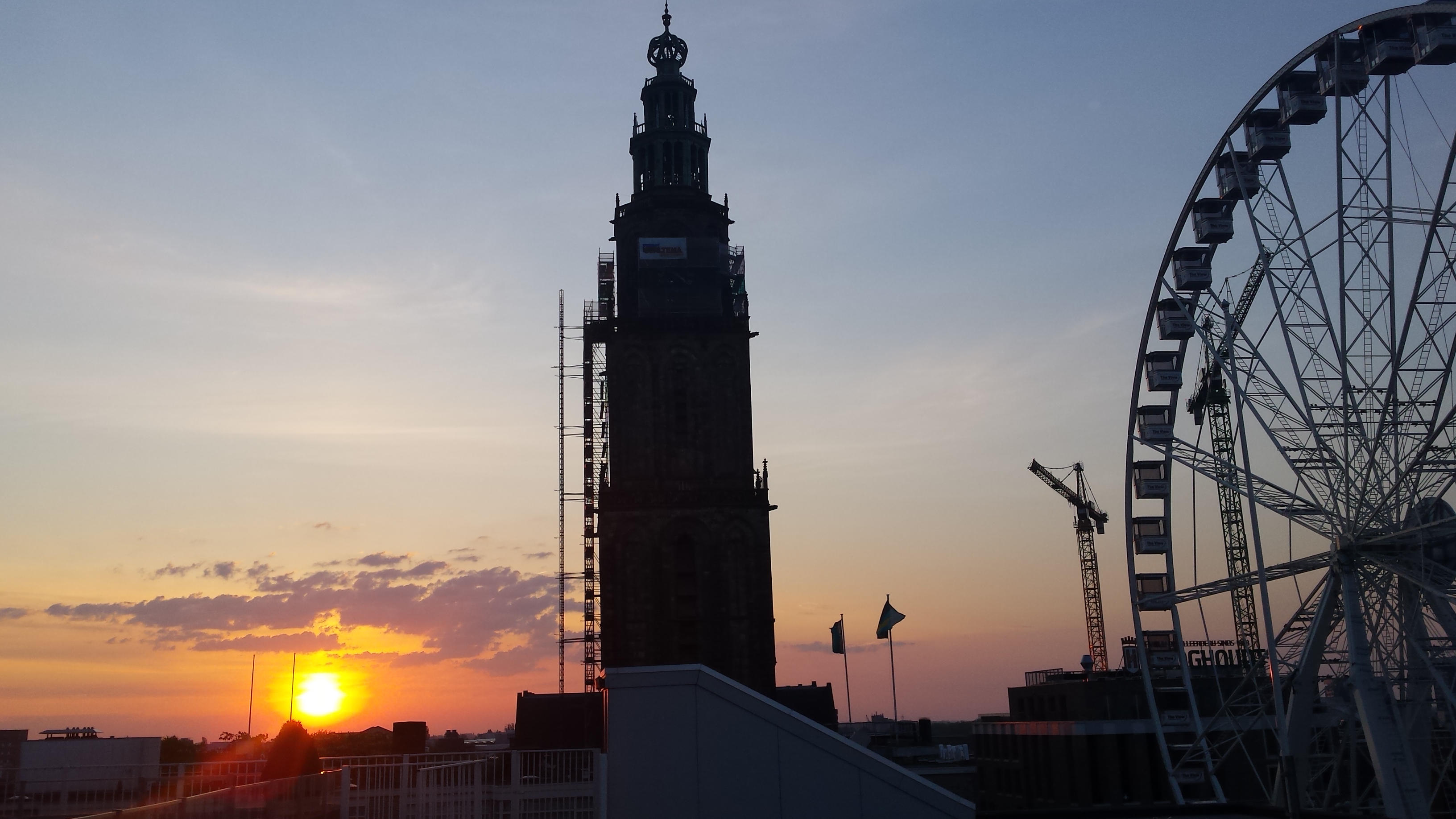 Precisely at that moment the sun peeks above the black silhouettes of the city and we are engulfed in light. The officers smile involuntarily. We stand there for a moment in awe.
‘All right, we’ll go to bed, father’, I say to the officer. He can’t help but grin, and shakes his head. They follow us downstairs through the hatch.
‘Good night’, my friend says to the officers once we have got downstairs.
‘Well, it’s already morning, boys’, he answers.
‘It won’t be tomorrow before…’ My friend starts.
‘Ssh!’ I punch his arm. He shuts up. We wave goodbye as we walk away. Children: 1 – Adults: 0.