The Canadian city of Montreal was recently crowned the world’s best student city. How do Montrealers at the Hanze, who have had the honour of experiencing both, compare the two cities?

French-speaking Catherine Haché (22) is an International Business student from Montreal who studies one semester at Hanze University. Her decision to trade the world’s best student city for Groningen was, in her own words: pretty random. ‘I wanted to come to Europe and take courses in English. Those were my only two requirements. Furthermore, I wanted to visit the Netherlands because my grandfather fought in the Second World War and contributed to the liberation of the Netherlands. There was a choice to make between studying in Amsterdam or Groningen and Groningen’s universities accepted the most students, which made it possible for me to come here together with my friend Laura.’
Laura Gagnon (22) is a student in Marketing Communication. She came to Hanze to study International Management. She chose for Groningen because of its compactness. ‘I was really interested in the Netherlands, but I didn’t necessarily want to study in another big city.’

Kind of dangerous
The size and accessibility of all the facilities in Groningen is something that appeals to both Montreal students. ‘I really like the fact that you have everything you need in a pretty small area. I really came to like the city on the very first day I was here’, Laura says.

Catherine needed some time to get used to her new surroundings. ‘In the first week I was so lost. The city is very beautiful but it all looked the same with the canals and the small streets. It is very different from Montreal. Now that I know the whole of Groningen and I love it. I’ve been to Amsterdam as well and I prefer studying in Groningen because it’s a smaller city.’ The bike-friendliness of the city is also something that appeals to both students. ‘I can go everywhere quickly with my bike’, Laura says. ‘When I go back to Montreal I’m really going to miss my bike. Biking in Montreal is kind of dangerous, car drivers don’t really care about you like here, so nobody really cycles’, Catherine adds.

Montreal’s pubs and clubs
The Montrealers think their hometown was crowned the world’s best student city because of its many different universities. ‘There are four universities in Montreal and three of them are downtown’, Catherine says. ‘The universities are highly regarded and together offer a wide variety of different subjects to choose from. Furthermore you have the choice to study in French or in English’, Laura adds. There are also plenty of other things to do in Montreal besides studying, discovering the nightlife for instance. ‘There are so many bars, pubs and clubs downtown and everything is open till very late’, the International Business student points out. If you spent too much money partying, there is also a solution. According to Laura Montreal offers a lot of student jobs. 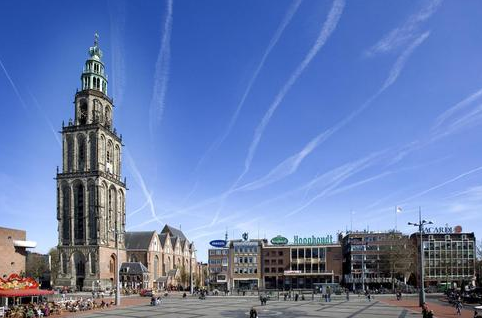 Awkward business hours
The biggest difference between Groningen and Montreal is the size. ‘Montreal is so much bigger,  there are twice as many cafés, bars, shops and pubs. Luckily everything is accessible by bus or metro’, Catherine says. The bigger size also has its downside, besides not being able to travel the distances by bike. ‘It can take longer to get to your destination. There are many different districts in Montreal so not many people actually hang out at the same place. The rent in the districts around the universities are generally too high for students, especially if you don’t want to live in a student house. So everybody lives pretty far from the university’, Laura adds. She doesn’t really miss her hometown, but also doesn’t see Groningen as a city she would stay. ‘Students who study in Groningen often have to leave the city to find a job.’

In Montreal everything is open till nine, except on weekends. Groningen could learn from that

Catherine does miss a couple of things Montreal has. ‘The business hours. In Montreal everything is open till nine, except on weekends. Groningen could learn from that. I also miss Montreal’s bars and pubs because there are so many that you can find one for every taste. For instance rock bars, bars that play hard metal, board game pubs, lounge bars, Irish pubs, clubs. Last but not least, I miss poutine, our national dish of French fries, cheese curds and gravy. This is so good when you have a hangover.’

Faster and cheaper
Montreal can learn a thing or two from Groningen. ‘The universities could organise more activities that cross the borders of their own institutes, work together to realise events where students from different programmes come into contact with one another’, Laura says. Catherine thinks her hometown could learn to respect cyclists a lot more. ‘It would be so much faster and cheaper for all the students if they could bike. Montreal could invest in bike paths.’

Be prepared to be disoriented

The Montrealers have some words of advice for students from abroad who want to come to the world’s best student city. ‘Be prepared to be disoriented’, Laura warns. ‘The first thing to do when you arrive is buy an student Opus Card and top it up so you can travel by metro and bus everywhere in the city, otherwise you cannot do anything’, Catherine adds. She also encourages foreigners coming to Montreal to learn a little bit of French. ‘If you want to study in Montreal in the summer, begin looking for an apartment in March to get a good one.’