One day before her thirtieth birthday Sabrina Vlaskalic passed away in a traffic accident. The Prince Claus Conservatoire held a memorial concert to bid farewell to the guitar teacher. 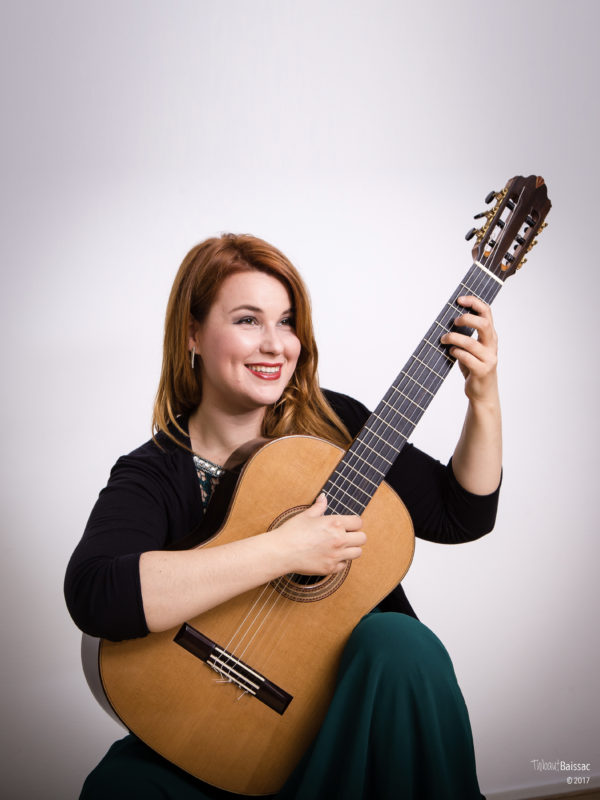 The Andrea Elkenbracht hall in the Prince Claus Conservatoire slowly fills up with people on the first Saturday afternoon of February. Students, teachers, family, friends and fellow musicians have gathered to remember Sabrina and to seek consolation, in each other and in music. Consolation for the grief that befell them on 17 January when Classical Guitar teacher Sabrina Vlaskalic died after she was hit by a truck on the roundabout of Vondellaan in Groningen.

As people take a seat, the usual pre-concert murmur fills up the space. But as soon as everyone is seated, serene silence falls in the concert hall. Even without giving it any words, the grief of the attendees is almost tangible. Quietly, guitarist Costas Cotsiolis, a member of the Volos Guitar Trio, steps onto the stage and begins to play. Some students hold hands and comfort each other. Others sway softly to the music.

Not only her ambition and musical talent were remarkable, we also expected she would be a great teacher

Harrie van den Elsen, the conservatoire’s dean, hired Sabrina as a classical guitar teacher in 2012. At the time, the talented Serbian guitarist was only twenty-three and thus became one of the youngest associate professors at a conservatoire ever. ‘She really stood out compared to the other applicants. Not only her ambition and musical talent were remarkable, we also expected she would be a great teacher.’

In his speech Van den Elsen not only describes Sabrina as extremely talented, but also as an impassioned and committed teacher who always went the extra mile for her students. ‘She often expressed how thankful she was for the opportunities the conservatoire offered her to develop as a teacher and a guitarist, but actually we should thank her. She has built up a fantastic guitar class. It was very important to her to be able to pass her passion and expertise on to future generations, even though she too was still quite young.’ Sabrina put her students first and regularly accompanied them to concerts and music competitions. ‘She wanted to be able to be proud of her students’, Van den Elsen says, ‘I can confirm to her that she can be very proud of her pupils, of each and every one of them.’

Mark Vondenhoff will remember Sabrina as an energetic, enthusiastic, inquisitive person and a passionate musician. ‘Beethoven once said that playing a wrong note is insignificant, yet playing without passion is inexcusable. This quote really suits Sabrina.’

Vondenhoff feels proud of everything the department of classical music had achieved. ‘A lot of the things I could be proud of were largely Sabrina’s achievements. For instance when our department had room for one extra guitar student. She was unbelievably enthusiastic and thankful. But it was thanks to her: many of our guitar students have come to Groningen only to be able to study with Sabrina.’

Second-year student Edwin Alserda (28) is one of those. ‘She recognized your potential and helped you fulfill it, even when you weren’t aware of your own capabilities yet. She also encouraged you to follow your own interests and knew a lot about different musical eras and styles. She was specialized in twentieth century guitar music, but also knew a lot about baroque for instance.’
The classical guitar teacher had a very busy schedule with many different activities. ‘She taught here at the conservatoire two days a week, she organized festivals, was busy with the Dutch Guitar Foundation, which she founded herself and traveled to London once a week for her PhD-research.’ She also initiated and organized summer schools, one of which took place last summer in France. ‘All the classical guitarists came together there. Everyone had a private lesson with Sabrina once a day, five days in a row. I will always remember that experience.’

Edwin and the thirteen other students of Sabrina step onto the stage after a performance by Aniello Desiderio, also a member of the Volos Guitar Trio. The students stand side by side and share their memories of and admiration for their beloved teacher. ‘Her name is Sabrina and she is a big inspiration to me. She told me that student and teacher enter into a lifelong relationship through their love for music. That is exactly how I experience it’, one of the student says. She passes the microphone on the next student, who adds: ‘Her name is Sabrina and she always managed to give me that little extra push when I thought I had reached my limit.’
Next, a tall bearded boy takes the microphone. ‘Her name is Sabrina and she is not only a great teacher, but also a good friend.’ When they are all finished, the guitar students make their exit from the stage to great applause. They clap along, for their teacher.

These student chose to study with Sabrina, that is a very personal choice

A week prior to the memorial concert, all fourteen guitar students traveled to Belgrade to attend Sabrina’s funeral together with Vondenhoff and well known Groningen guitarist Remco de Haan. ‘Someone in Sabrina’s network in America started a crowdfunding initiative to pay for the travel expenses. Within twenty-four hours the target amount had been donated and eventually a total of around 9.5 thousand dollars was collected. This enabled Sabrina´s entire class to attend’, Van den Elsen recounts. The death of the beloved teacher has stirred up a great deal of emotion, not only among the students, but also in the guitar scene and at the entire Hanze. Van den Elsen: ‘The students are really shaken up. In the field of music, you choose your own teacher. These student chose to study with Sabrina, that is a very personal choice. So it is also a great personal loss when this comes to an end in this way, so abruptly.’

Sabrina believed that anything was possible, if you only set your mind to it and I believed her

The students’ contribution is followed by a video of Sabrina lighting up the stage with a performance of Memori. ‘She wrote this piece when she was sixteen to comfort herself after she failed to get through the first round of an international music competition’, one of the students explains on stage. After that, Sabrina´s boyfriend Jorrit Douwes gives a moving speech that once again underlines the unbounded ambition, energy and enthusiasm of the talented guitarist. ‘Sabrina believed that anything was possible, if you only set your mind to it and I believed her.’ A final performance by the entire Volos Trio is followed by a standing ovation. For Sabrina.